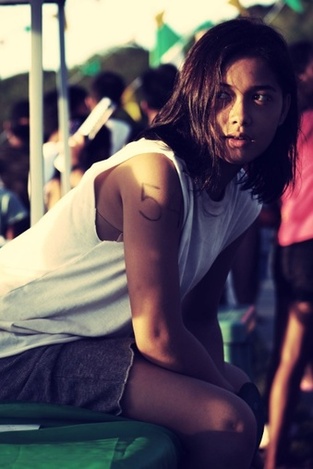 Born October 5, 1988 - Maja Salvador is one of the latest in line of the illustrious show biz clan of the Salvador family. She is now making her own identity and mark as the Dance Princess of the Philippines and one of the most promising young actresses in the industry.

There’s something about a teenaged girl aching for her long-lost dad that moves one’s heart. When ABS-CBN’s Charo Santos-Concio saw Maja Salvador pleading on nationwide TV for a glimpse of her dad Ross Rival, something in the girl’s angelic face tugged at the network executive’s heartstrings. Concio asked her staff to look for Maja.

Thus did Maja Salvador sign up with the Lopez network and was introduced as John Prats’ partner in "It Might Be You" on February.

Before that though, Lady Luck was working overtime for the 17-year-old girl from Aparri. Maja met Farrah Ramos, movie columnist-talent manager Chit Ramos’s daughter in a modeling workshop and they became fast friends. Little did Maja know their friendship will lead her, not only to a reunion with her dad, but to a promising career in showbiz, a field her father’s side of the family has been identified with for decades.

Maja confided to Chit that she had long wanted to see her dad, whom she last saw when she was only seven. Maja did not know Chit wrote about showbiz and never suspected her wishful thinking will come true.

To Maja’s surprise, Chit replied, “You want to see your dad? Let’s call Phillip (Salvador, Maja’s uncle).”  Before Maja can say a word, Chit dialed Philip’s number on the cell phone and uncle and niece were talking.

The long-delayed father-daughter reunion – chronicled and aired on The Buzz – took place in the house of Ramon Salvador, Phillip’s older brother. As fate would have it, Concio was watching at that time, and that touching scene stuck in her mind. The rest, as they say, is history.

“I feel no bitterness toward my father, even if he and my mom separated when I was a baby. My mom said I won’t be here if it weren’t for him,” says Maja.

Besides, she has moved on herself. Maja is grateful to her Japanese stepdad for taking good care of her. It was her stepdad who, upon learning she was entering showbiz, came home from Japan, where he markets Toyotas, to buy Maja a van to take her around.

Maja is having the time of her life, never mind if she has to wake up early to make it to her classes in a school close to their home in Cainta at 7 a.m. Never mind, too, if unlike before, when she can go to malls in casual shorts, “I must look presentable because fans see me.”

She need not worry about her get-ups though. Navy/White Tops got her as image model. The brand’s pastel colors complement Maja’s young, carefree image, and its casual look, she adds, jibes with her love for things simple yet comfortable.

Her style has even caught the eye of Aga Muhlach and Janice de Belen’s son Igi Boy, who sent Maja flowers during a presscon.

“Maybe it’s his way of telling me I should feel at ease at that time.” Maja brushes away romantic ideas. 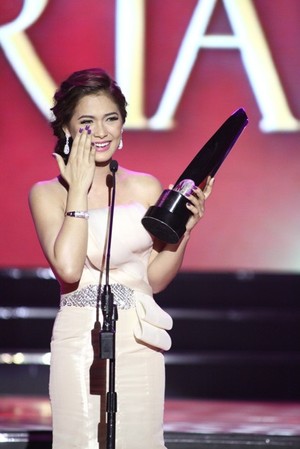 Salvador started her acting career as a supporting character in the 2003 TV series It Might Be You which was then top-billed by John Lloyd Cruz and Bea Alonzo. She was later on cast as one of the lead characters in Spirits the following year and has appeared in several episodes of Maalaala Mo Kaya.

In 2006, Salvador made her film debut as one of the supporting characters in the horror movie Sukob wherein she portrayed the role of a clairvoyant young girl. This earned her several accolades including the Star Award for Movies for New Movie Actress of the Year and the Golden Screen Award for Breakthrough Performance by an Actress, as well as a nomination at the FAMAS Awards for Best Supporting Actress. That same year, she also starred as a social climber teenage girl in the film First Day High and was also critically acclaimed for her portrayal as a teenager suffering from cerebral palsy in the "Regalo" episode of Maalaala Mo Kaya. For the latter, Salvador earned a nomination for Best Single Performance by an Actress at the Star Awards for Television but lost to co-star Vilma Santos, who played as her mother in the said episode.

Salvador reunited with John Lloyd Cruz and Bea Alonzo in the 2007 box-office movie One More Chance. Her portrayal in the film was highly regarded by movie buffs, describing her "perfect" and "luminous". The role gained her a Star Award for Movies nomination for Movie Supporting Actress of the Year. During this year, she was also cast as one of the three leads in the TV series Pangarap na Bituin along with Sarah Geronimo and Rica Peralejo.

In 2009, she top-billed the afternoon drama series Nagsimula sa Puso, a remake of the 1990 film of the same title, in addition to appearing as one of the principal characters in the primetime drama May Bukas Pa. Salvador also starred in films such as Villa Estrella and Share Rattle and Roll XI which was an entry to the 2009 Metro Manila Film Festival. She later on starred in the television series Impostor in 2010 and in the horror film Cinco.

Salvador, in 2011, was cast as one of the main characters in the critically acclaimed family-military drama series Minsan Lang Kita Iibigin. That same year, she also co-produced the independent film Thelma, with which she also starred in the title role. Her performance in the film was praised by Philippine Entertainment Portal's Bong Godinez, stating in his review that Salvador gives an "impressive performance" and that she "brandished her depth as an actress without going overboard". He also added that she "[dishes] out the emotions in an understated manner". However, Tessa Guazon of the Young Critics Circle - Film Desk criticized her performance by saying that there are failures in "conflict and depth".  Furthermore, she mentioned that Salvador was out of track in the movie and that she "missed [the] subtle leap". Despite mixed reviews on the film, Salvador went on and bagged the Gawad Urian Award for Best Actress as well as the Film Academy of the Philippines Award for Best Actress.

In 2012, Salvador starred in the afternoon drama series Lumayo Ka Man Sa Akin and subsequently in the primetime soap Ina, Kapatid, Anak alongside Kim Chiu in the title role. She also starred in films My Cactus Heart and 24/7 in Love.